The yearling sales season for 2015 is almost over. Tattersalls catalogued 2,109 yearlings in 2015 across Books One, Two and Three, compared with 1,890 in 2014. Whilst median prices in Books One and Two were similar in 2015 compared with 2014, Book Three aggregates were down, with a 22% fall in median prices.

Whilst aggregate prices were down, we noticed during Book Three that earlier lots were selling for higher prices than lots catalogued later in the sale. In Graph 1 below a moving average of prices relative to the sale median is shown in lot order. There is a pedigree quality correction included in prices to account for differences in pedigrees between lots, and vendor buybacks an unsold lots are excluded. Lots were catalogued on both days according to dam name, in order from W to V. Prices achieved were lower on day two relative to day one. Pedigrees were less good on day two relative to day one, which explains the difference that can be seen in day one (up to lot 1773) and day two (lot 1774 onwards) . However just looking at day two prices were 20% to 40% lower towards the end of the day than at the beginning. These are large numbers. Given lots are catalogued in order of the first letter of the name of the dam by day, it wasn’t a year to be consigning a yearling out of a dam whose name began between R and V on day two. 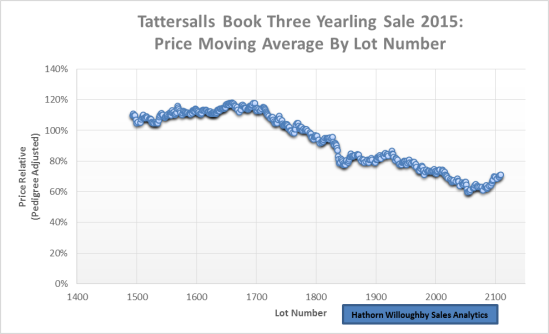 Allied with prices, we can look at rates of vendor buybacks and unsold lots. See Graph 2 below, which charts a moving average of the rate of vendor/not sold lots in lot order. Consignors reacted to price falls by buying back their yearlings if reserves were not met. 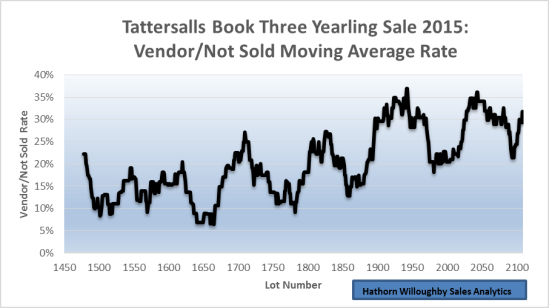